IRIS and international partners established the Greenland Ice Sheet Monitoring Network (GLISN) of seismic and geodetic sensors (Figure 1) to enhance the scientific community’s capability to observe the dynamic behavior of the Greenland Ice Sheet as it interacts with the atmosphere, oceans, and solid Earth. GLISN offers the unique ability to record, understand, and respond to changes in the size and scope of the Greenland Ice Sheet’s behavior as it reacts to climate change. Broadband seismological observations provide a means to address several critical and currently poorly understood aspects of this important Arctic system and its processes. Glacial-earthquakes are increasing in occurrence, and their spatiotemporal patterns continue to evolve. Rates of crustal seismicity are also expected to grow as ice melts and withdraws, but the background rates are poorly known. Models of the Greenland Ice Sheet are hampered by limited knowledge of its basal conditions including the geothermal heat flux, and characterization and interpretation of mass-loss signals observed using GRACE and GPS data are complicated by limited knowledge of the viscoelastic properties of the crust and mantle underlying Greenland. Seismic imaging techniques using observations of the propagating seismic wavefield can characterize the subsurface structure, permitting inference of heat flux and the space- and time-varying response to surface loading and unloading. Similarly, analyses of seismic source signals due to ice and water motion, rock fracturing, and ocean loading provide constraints on processes including iceberg calving, deformation within the ice mass and at the bed, changes in the bedrock stress state, and variability in sea state and sea-ice cover. Such observations provide key input for the effort to understand the effects of surface melt and ice-ocean interactions on ice-sheet and glacier dynamics. 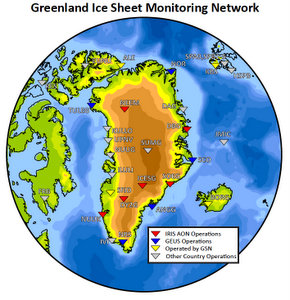 GLISN is a broadband, multi-use seismological observing network designed with the capability to allow researchers to understand the changes currently occurring in the Arctic and with the operational characteristics necessary to enable response to those changes as understanding develops. Installation of the GLISN network, funded by an NSF MRI award along with significant international contributions, began in the summer of 2009 and was completed during the summer of 2012. Full implementation of routine, near-real-time data transfer to the IRIS DMC archive was completed during the summer of 2013, which represented the end of the MRI award. During network design and installation a high priority has been placed on data quality and network operational reliability. This draws on the experience of the IRIS facility in operating and supporting global and regional, permanent and temporary seismographic networks, as well as on the experience of our international partners. All data and metadata are freely and openly available through the IRIS Data Management Center and partner data centers in Europe. GLISN thus allows the Arctic science community full access to year-round recordings of seismic and geodetic signals produced by the Greenland Ice Sheet, as well as a long-term observatory as a fiducial reference for guiding higher resolution, temporary experiments.

Of the 33 station GLISN network, 11 stations were upgraded or installed through the MRI grant from NSF. Six stations will receive long term O&M funding through the NSF Arctic Observing Network (operated through IRIS), and the remaining 27 stations have commitments for funding from our International Partners. Current international partners in GLISN include Denmark, Germany, Switzerland, Canada, Norway, Japan, Italy, France, Korea, and Poland. The GLISN network is defined in Table 1 with the collaborating organizations.

The US portion of the project takes scientific advice from the GLISN Science Advisory Committee made up of the following participants:

Anderson and Nettles serve as the US technical and scientific representatives (resp.) on the GLISN International Steering committee.

More information on the International GLISN project can be found at www.glisn.info.
An up-to-date list of GLISN-related publications can be found on our Google Scholar page.