By Alka Tripathy-Lang and Wendy Bohon

Australia, unique for its koalas and kangaroos, is also a geologic unicorn, having been part of all major supercontinents of yore, including Rodinia, Pangea and Gondwana. This distinctive landmass contains almost all known rock types from each period of Earth’s history. Because of Australia’s many past jousts with other tectonic plates, disentangling the details of this tapestry of terranes can be a rather stubborn task.

Scientist Mohammed Bello, then a doctoral student at the University of Aberdeen, worked to unravel what the crust looks like between the southeastern part of the continent— the Tasmanides—and the island of Tasmania, separated from the mainland by Bass Strait. He and his colleagues explored the nature of the crust and Mohorovičić discontinuity, or “Moho", which is the transition between the crust and mantle. To illumine these boundaries not obvious from the surface, Bello used data from eight existing permanent seismic stations, including Global Seismographic Network station TAU, along with a deployment of 24 temporary seismic stations. With these data, he and his colleagues explored the link between the Tasmanides and Tasmania by extracting crustal thickness and determining the Moho’s character to differentiate between distinct tectonic blocks. 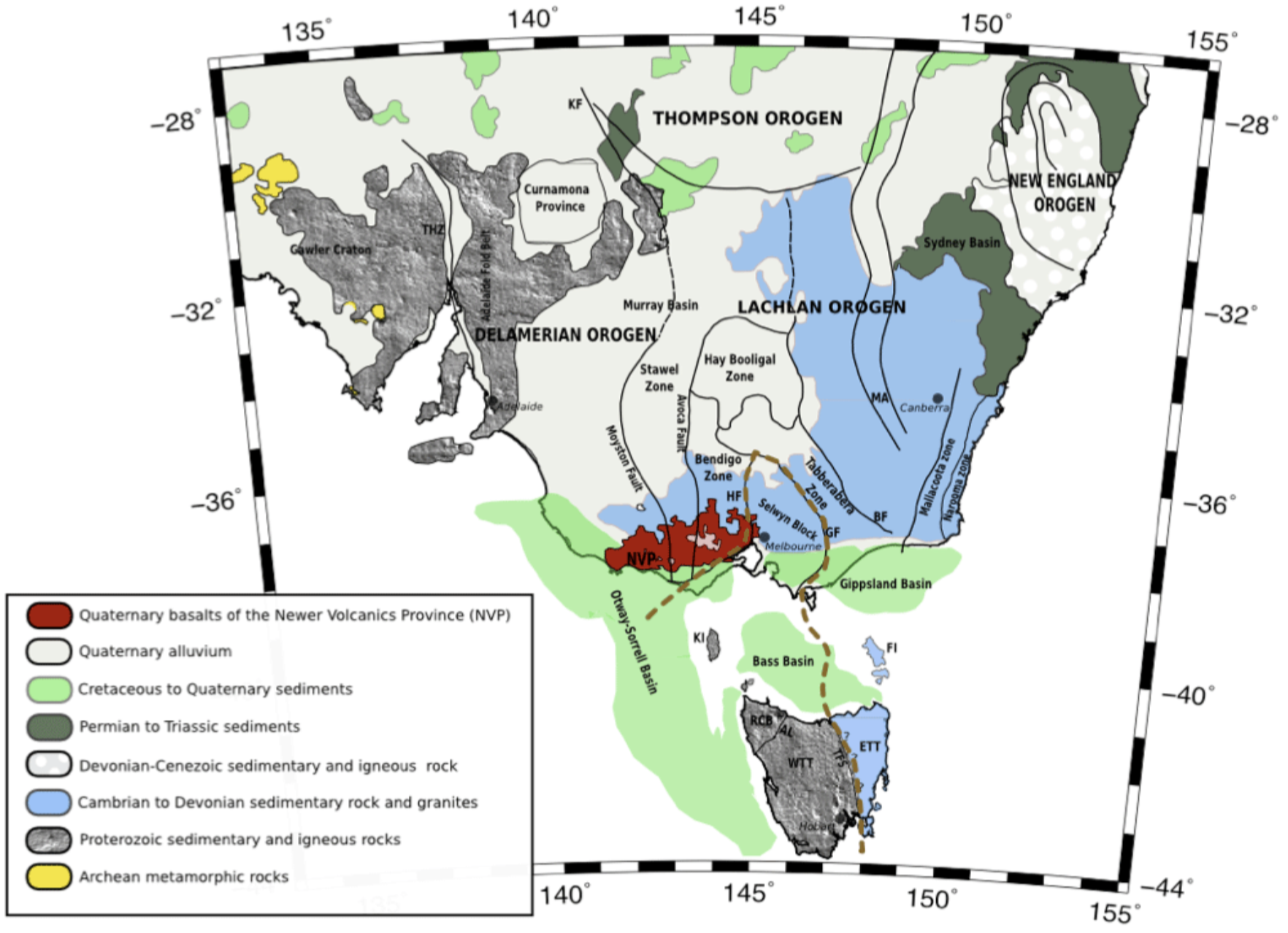 The Tasmanides docked with the Precambrian shield of Australia in late Neoproterozoic to early Paleozoic time. The region now comprises the eastern third of the Australian continent. From Paleozoic to Mesozoic time, the Tasmanides formed one of the most extensive accretionary orogens in the world as the nascent Pacific plate subducted beneath East Gondwana, an amalgamation of Antarctica, Madagascar, India, and, of course, Australia.

The Tasmanides (Figure 1) include four orogenic belts, each of which records past mountain-building events. The oldest, westernmost orogen, the Delamerian, extends across the Bass Strait into western Tasmania. The Lachlan belt, which lies to the east, consists of Ordovician to Carboniferous rocks. The other two orogens — the Thomson and New England — lie to the north and also record the rise of Paleozoic mountains. The presence of multiple orogens attests to several phases of subduction and metamorphism long ago.

The island of Tasmania’s Precambrian outcrops bear little similarity to Precambrian rocks of mainland Australia, but much of the Australian basement hides beneath sedimentary cover. One hypothesis posits that during the Precambrian, central Victoria (the southeasternmost province of mainland Australia) and western Tasmania formed a microcontinent called VanDieland that fused with East Gondwana at the end of the Cambrian, potentially during the Delamerian Orogeny exposed today in the western Tasmanides. If Precambrian fragments of VanDieland exist on the mainland tucked beneath the thick sedimentary blanket, they should have distinctive seismic characteristics similar to the Precambrian pieces of Tasmania.

During the Cretaceous, Australia and East Antarctica began their separation. Their unhitching also spurred another rift between Tasmania and Australia along Bass Strait, which eventually faltered, according to coauthor Nick Rawlinson, a seismologist at the University of Cambridge. Because of this failure to rift, Tasmania remains part of the Australian tectonic plate, he says.

To further complicate the Tasmanides’ history, recent intraplate volcanism in Australia suggests that a stationary mantle plume pushed from below as recently as several thousand years ago. As Australia moves northward, the plume interacts with the underside of the continent.

Using seismic data collected from 2011 to 2013, Bello and his colleagues determined crustal thickness and Moho depth across the study area. They defined the transition between the crust and mantle (the Moho) as either sharp (less than or equal to two kilometers) or broad (greater than 10 kilometers). However, knowing how the Moho changed between two stations proved difficult, with transitions possibly being gradual or step-like.

Bello and colleagues also determined the ratio of P-wave velocity to S-wave velocity, or Vp/Vs. As a reminder, P-waves travel through liquids, but S-waves do not. The ratio of the two helps seismologists constrain the chemical composition of the crust or degree of partial melting better than velocities alone.

With these three crustal characteristics — thickness, nature of the Moho and Vp/Vs — Bello and colleagues divided the region into three tectonic terranes: the Lachlan Fold Belt, VanDieland, and the East Tasmania Terrane plus eastern Bass Strait, or ETT + EB.

The Lachlan Fold Belt — the northernmost terrane (Figure TK) — features a broad, thick Moho underlying a 39-kilometer-thick crust. Although high topography tends to have thicker crust in general, the broad Moho suggests that at some point, mafic material was underplated below, or stuck to the underside of, this thick crust. Vp/Vs values support this hypothesis. Though the reason for this underplating is unknown, one possible explanation proposes that the above-mentioned mantle plume that propagated from Queensland southward might be the culprit.

Bello and his team found that in the region southwest of the Lachlan Fold Belt, crustal thickness varies. The thick crust in the north—more than 37 kilometers—thins dramatically to 26 kilometers beneath the Bass Strait, increasing again beneath King Island. It thins yet again to a mere 23 kilometers below northwestern Tasmania before increasing to 33 kilometers under southern Tasmania. Along with these swings in thickness, variable Vp/Vs indicates compositional fluctuations as well as the presence of melt. Low Vp/Vs may point to the presence of granite, whereas higher values might hint at melt associated with intraplate volcanism.

This motley region is VanDieland, a Precambrian continental fragment embedded within the Tasmanides, according to Bello and colleagues’ interpretation. The undulatory crust may result from ribbons of continental crust sutured together at the end of the Proterozoic. However, he and his colleagues also point out that the crust may have thinned during extension because of the the failed rift along Bass Strait, which passes through the most irregular part of the crust.

The last major crustal region lies south of the Lachlan Fold Belt and east of VanDieland. This is the crust of the East Tasmania terrane and eastern Bass Strait, or ETT + EB. Here, the crust behaves consistently with both uniform thickness of 31-32 kilometers — thicker than the thickest crust of VanDieland—and a constant Vp/Vs.

This region is markedly distinct from the adjacent, irregular VanDieland, and may be a southern continuation of the Lachlan terrane to the north, albeit with thinner crust (Figure TK).

Taken together, these findings showcase the complexity of the regional geology in Australia and the complex geologic history of the continent.