Antarctica’s ice sheets are on the move, with the solid ice flowing toward the surrounding oceans. This exodus toward the coasts, explains Paul Winberry, a seismologist at Central Washington University, is enabled by fast moving ice streams—regions where liquid water located at the interface between the ice and underlying subsurface facilitates an ice sheet’s seaward slide.

On the western side of the continent, the West Antarctic Ice Sheet moves with the help of the Whillans Ice Stream (one of several ice streams), which pours ice into the Ross Ice Shelf that floats above part of the Ross Sea. Beneath the Whillans Ice Stream lie multiple lakes connected by channels—a shallow hydrologic system into which researchers have drilled, finding microbial life hidden in the icy waters.

However, research on the Great White Continent can be difficult to conduct in the best of scenarios. Peering into the interface between ice and Earth, which is often hundreds to thousands of meters below the frigid air found at the ice surface, proves a formidable task. Scientists often rely on various geophysical tools that allow them to glimpse what lies beneath. Thanks to such studies, researchers know that below the shallow hydrologic system of lakes and channels, a thin (less than ten meter) layer of glacially derived, water-logged sediment called “till” resides.

Understanding the deeper hydrologic system that might include water-filled sedimentary basins that are hundreds, or even thousands, of meters thick has proved elusive—until now. In a study published recently in Science, researchers including Winberry and Chloe Gustafson, formerly a postdoctoral scientist at Scripps Institution of Oceanography and now a geophysicist with the U.S. Geological Survey (USGS), combined seismic and magnetotelluric data to trace great quantities of groundwater extending more than a kilometer below the Whillans Ice Stream.

Groundwater is typically defined as water beneath the land surface, stored within any space available in soil, sand or rock. In Gustafson’s study, which was part of her doctoral work at Lamont-Doherty Earth Observatory, Columbia, this definition required adjustment to exclude the shallow 10-meter thick, water-saturated till layer. “This adjustment was made in order to distinguish our new discovery (deep groundwater) from the already known subglacial system,” says Gustafson. The till was instead included in the shallow hydrologic system of subglacial (below the glacier) lakes and channels.

Previous studies recognized the likely existence of deep groundwater below the till, but confirmation proved challenging. One way to do it is to use electromagnetic methods to extract information about a material’s resistivity—a measure of how resistant it is to the flow of an electric current. In Antarctica, glacier ice is highly resistive—it does not help electricity flow. On the other hand, sediment has low resistivity, with bedrock resistivity somewhere in between. Adding salt to water can change resistivity—the more salt in water, the less resistive it is, and the more easily electricity will flow.

One way to collect electromagnetic data is via airborne methods, like from planes or helicopters. Unfortunately, these methods can only see through ice that’s about 350 meters thick. To obtain the required information, Gustafson and her colleagues Kerry Key, Matt Siegfried and Meghan Siefert installed magnetotelluric stations atop the ice to see through hundreds of meters of solid water to Earth’s subsurface structures.

The Whillans Ice Stream, a fast moving part of the ice sheet, is about 800 meters thick. Previous modeling studies suggest that groundwater may contribute to the flow. A 0.38 meter (about 1.2 feet) sediment core extracted from below the Whillans Subglacial Lake showed a seawater component, suggesting the existence of a deeper reservoir connected to the ocean.

Gustafson and colleagues focused their magnetotelluric study on two hydrologically connected regions—Whillans Subglacial Lake, and its downstream outlet, the Whillans Grounding Zone. Both regions’ shallow hydrology has been extensively studied via drilling and geophysical surveys.

Previous seismic studies that used PASSCAL instrumentation at each location revealed packages of stratified sediments that are greater than 100 meters thick. Additional seismic data collected from the broader region, though unable to image the deep groundwater system, helped put the magnetotelluric data in context, explains Winberry. The seismic data can be found at the IRIS DMC.

Using a combination of magnetotelluric observations collected from Whillans Subglacial Lake and Whillans Grounding Zone and the seismic data, Gustafson was able to determine sediment thickness beneath the Whillans Ice Stream. 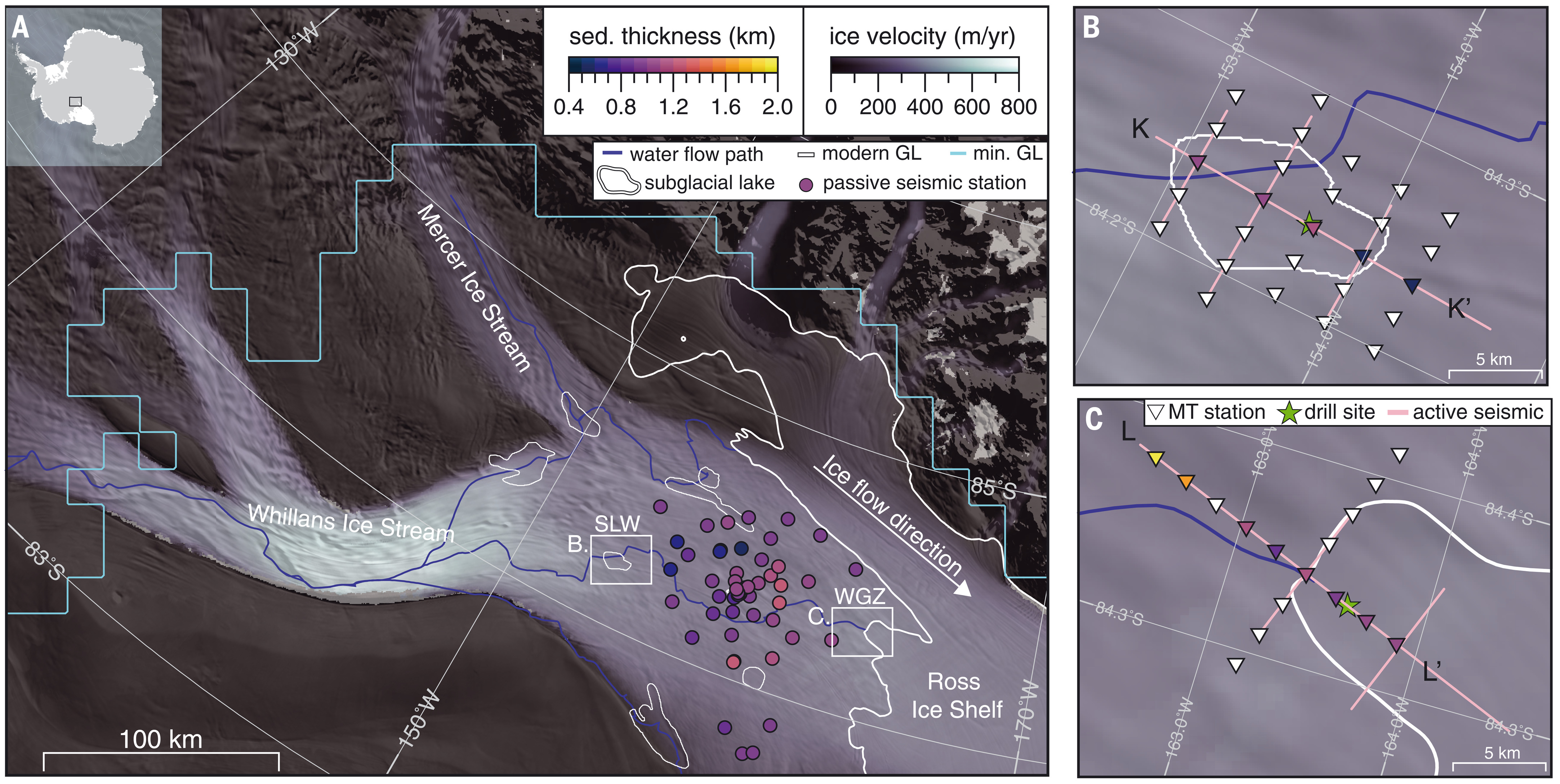 Using seismic data only, Gustafson and her colleagues found that the sediment thickness across the region ranged from between 600 to 1300 meters (with an uncertainty of plus or minus 200 meters). This is consistent with the magnetotelluric derived sediment thickness at the Whillans Subglacial Lake (between 500 and 1200 meters) and the Whillans Grounding Zone (900 to 1900 meters). By carefully exploring magnetotelluric data, they extracted information about groundwater contained within the sediments. In particular, they used observed, or empirical, relationships to convert resistivity to water salinity—how salty the water is—at each locations’ past drilling site. At both places, the water at the top of the sediment column is brackish, or only slightly salty. Salinity initially increases with depth, reaching its peak—comparable to seawater—at 700 meters at the Whillans Subglacial Lake and 400 meters at the Whillans Grounding Zone.

Because both magnetotelluric sites have similar resistivity structures and groundwater salinity values, the uptick in saltiness with depth is unlikely to be local. The authors argue that the thick sediments found in the more widely distributed seismic data are also water-logged and get saltier with depth.

“[The seismic data allowed] us to more confidently extrapolate the magnetotellurics of groundwater across a wider area to make the conclusion that this was a regional groundwater system,” says study coauthor Winberry, who collected and processed the seismic data. Using that extrapolation, they calculated that the volume of deep groundwater is an order of magnitude greater than the water contained in the shallow hydrologic system, which includes the subglacial lakes, channels and water stored in the veneer of glacial till.

Because groundwater freshens upward, closer to the base of the ice stream, and also because of previous geochemistry at Whillans Subglacial Lake (mentioned above), Gustafson and colleagues propose that the salty water is of marine origin. The last time the sea encroached on the Antarctic’s land, roughly 7,000 to 5,000 years ago, seawater may have rapidly infiltrated the sediments now beneath Willans Ice Stream. In fact, the deepest salty water observed by Gustafson might have been left behind when West Antarctica was ice free and ocean-covered, and the likely marine sediments were initially deposited.

The brackish water at the top of the sediment column could be less salty because of the addition of fresh meltwater at the base of the ice. The salinity profiles demonstrate that these water sources—both fresh and salt—are connected.

How that mixing happens, however, could change depending on surface conditions because the ice that sits atop the system may drive the direction of flow. For instance, when ice thickens, shallow meltwater at the base of the ice stream can be pushed into the sediments, encroaching on the deep, saline reservoir. Should meltwater sink, heat would be removed from the base of the ice sheet, potentially promoting freezing conditions that could slow the ice flow, or lock it in place. On the other hand, when the ice sheet thins, deep groundwater could rise into the shallow system. Rising saline water could provide heat, melting the ice sheet from below. Future models of the hydrology of this system, as well as its effects, need to incorporate both the shallow and deep waters to better understand how they might interact with each other and the ice sheet itself.

Because these sedimentary basins are most likely marine in origin, biogeochemical cycles linked to deeply buried marine sediments may be occurring today. For example, creation of methane in deep marine sediments disgorges the potent greenhouse gas into the oceans. If upwardly mobile groundwater transports methane, and any other sequestered carbon, to the shallow hydrologic system of Whillans Ice Stream, the more carbon than previously considered is heading toward the ocean, upping Antarctica’s contribution to climate change.