Most of North America’s seismic activity occurs in Alaska, the location of the second largest earthquake ever recorded (Mw 9.2 in 1964). 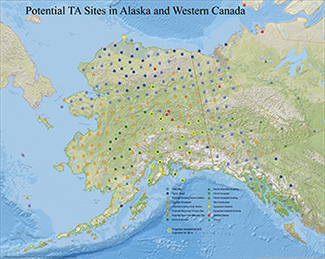 At this active tectonic margin, a subducting plate descends into the mantle, driving abundant magmatism in an arc nearly 3,000 km long. From late 2013 through 2018, the USArray Transportable Array (TA) will site, deploy, and operate seismograph stations throughout Alaska to image its deep geologic structure (Figure 1). This last TA phase completes the experiment’s coverage of the continental United States. It is likely that the TA will be supplemented by occasional portable seismic instrument deployments and by other related scientific activities onshore and offshore.

As a demonstration of what can be expected when the TA and these portable arrays are deployed, scientists conducted two experiments, the Broadband Experiment Across the Alaska Range (BEAAR) and Multidisciplinary Observations Of Subduction (MOOS) (Figure 2). 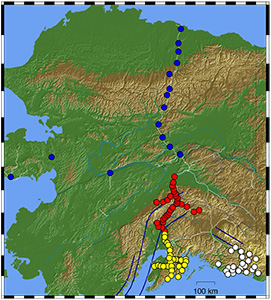 BEAAR featured 36 seismometers operating at varying times from 1999 to 2001, and MOOS involved 34 seismometers between 2007 and 2009; both arrays were designed with short station spacings of 10 km to allow high-resolution imaging techniques to be applied.  They recorded a clear signal between the southern coast near the trench at about 40 km depth that revealed a distinct low-velocity channel along the thrust zone where great earthquakes nucleate, and thousands of microearthquakes per year paralleling that thrust zone (Figure 3).

Thrust faulting stops deeper than 50 km, but these images show subducted crust to a depth of 130 km, imaged as a layer of lower seismic velocity than surrounding mantle. By comparing the observed seismic velocities to rock geochemistry, we establish that crust subducts intact but that it has not yet fully metamorphosed to a rock that forms under high temperature called eclogite until depths of 130 km. These images are based on “receiver function” methodologies, which extract information from P wave to S wave conversions and reflections seen in signals from earthquakes around the globe as the P waves interact with structures below the arrays.

Several lessons emerged from these two projects. First, because seismicity is much more abundant in Alaska than the lower 48 states, special approaches are needed to handle the expected large rate of data return. 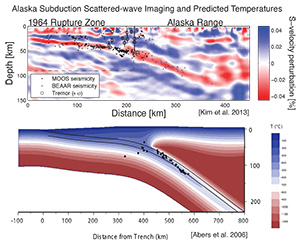 South to North cross sections
from off the coastto the Alaska Range.
(top) Migrated receiver function image from
combining MOOS and BEAAR data.
Solid dots are earthquakes recorded by the
MOOS and BEAAR arrays, which align
with the low seismic velocity along
the plate interface .
(bottom) A thermal model along the same
transect showing the cooler temperatures
of the top of the subducted slab.
From Kim et al., 2014, DOI

Automated approaches to signal detection and identification will be critical to keep up with the hundreds of locatable earthquakes each day. Second, subduction of oceanic lithosphere results in some of the largest lateral variations in seismic properties within the upper mantle observed anywhere, at depths where broadband arrays such as the TA can provide the most information about Earth. These variations result from strong compositional contrasts between subducting crust and mantle and up to 1000°C lateral temperature changes. The variations in seismic properties will make excellent targets for both TA-style and denser arrays such as BEAAR and MOOS that can apply array methods to image features with dimensions of a few kilometers. Third, logistics are challenging but not insurmountable if projects are well designed and logistical constraints are taken into account. Road systems are sparse but exist in some parts of the state and airstrips exist in many others, although helicopters are clearly necessary in many regions and are included in many TA deployment plans. Finally, many problems associated with great earthquakes and volcanism will require coordinated marine programs because the plate boundary system does not stop at the coastline and the Aleutians are small islands. Ocean bottom seismometers can play a critical role in understanding both the thrust zone and remote segments of the volcanic arc. One potential opportunity for doing so will arise when the Amphibious Array completes its current four-year deployment off Cascadia and may become available for redeployment elsewhere.

Overall, the arrival of USArray in Alaska has tremendous potential to reveal fundamental properties of the nature of subduction beneath continents, and focused experiments in this region will increase our knowledge even more.

To learn more about USArray in Alaska, view the webinar presented by Dr. Geoff Abers (http://www.youtube.com/watch?v=qo0Bh-qHkvc&feature=youtu.be) or go to http://www.usarray.org/Alaska.