A 2100 kilometer-long gash tears through the Alaskan landscape, stretching from Canada’s northwestern British Columbia to the Bering Sea. This structure is the same type of fault as the famed San Andreas to the south. Grinding along a set of steeply dipping shallow breaks in the earth, the Denali fault’s north side moves in a southerly direction and its south side heads the opposite way, with right-lateral motion.

Geologists split the Denali fault into three distinct segments, each with its own level of historical seismicity. In particular, the central segment achieved notoriety in 2002 when a magnitude-7.9 earthquake struck the mountainous region between Anchorage and Fairbanks. As one of the largest earthquakes ever recorded on U.S. soil according to the U.S. Geological Survey, the earthquake rent the earth's surface for more than 340 kilometers, with several meters of right-lateral offset in some places. Part of the rupture occurred on a fault strand that allowed the break to travel southward, bypassing the eastern part of the Denali Fault.

Whether the eastern Denali Fault could rupture as catastrophically as its westerly counterparts was unknown, but research by a team of scientists from the University of Calgary, led by M.Sc. student Minhee Choi, aimed to find out. In their recent Geology paper, they relocated thousands of earthquakes associated with an odd doublet of quakes that occurred in 2017 near the eastern extent of the Denali Fault. 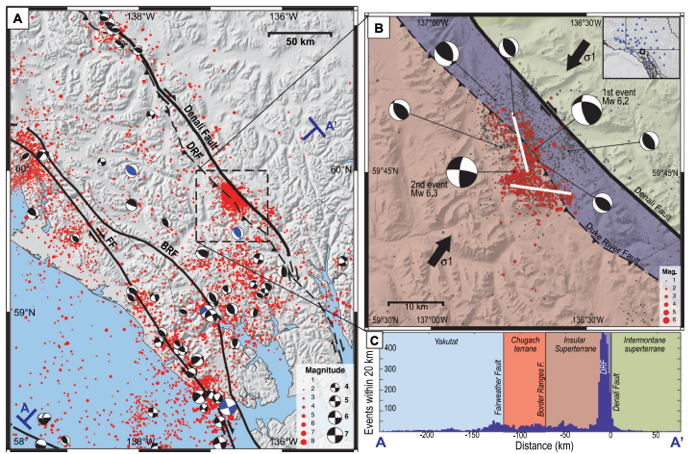 The geomorphic expression of the Denali fault diminishes to the east, such that the great scar in the landscape becomes only a subtle linear feature tucked into the remote wilderness of Canada’s Yukon and the northern part of British Columbia. GPS data, stress measurements and strain rate information support the hypothesis that the eastern part of the Denali fault slumbers, with scant seismicity.

However, on May 1, 2017, a pair of earthquakes, a magnitude-6.2 and magnitude-6.3, roiled a remote part of British Columbia that sits between both Canada’s Yukon and the southeastern arm of Alaska. These quakes occurred within a two-hour interval, and both events behaved as a mix of both left-lateral strike-slip and reverse faulting — an uncharacteristic faulting style for the Denali Fault.

To explore whether this earthquake doublet involved the eastern Denali fault, Choi and her colleagues analyzed the two main earthquakes, and approximately 15,000 aftershocks of what’s now called the St. Elias earthquake sequence.

Because of the presence of the Earthscope USArray Transportable Array stations during the St. Elias sequence, the entire suite of events is exceptionally documented. Data are available from the IRIS DMC. More than 60 stations covered the affected region, with three stations installed less than 50 kilometers from the doublet.

With these data, the team explored how stress changed in the region. When an earthquake occurs, stress changes, bringing some faults closer to failure while stabilizing others, according to coauthor David  Eaton, a professor at the University of Calgary. When an earthquake changes the stress on a nearby fault such that it fails, the initial shock “statically triggered" the second. Choi found that in the case of the two mainshocks, the first triggered the second.

They also found that the first event had a significant non-double couple component, which means that the fault did not rupture on a single planar feature. Instead, this earthquake likely ruptured in a complex manner along new faults, suggesting an immature system that initiated with a combination of reverse and left-lateral strike-slip motion.

With the detailed data from the USArray Transportable Array, Choi and her colleagues relocated the thousands of aftershocks. This process involved carefully refining the seismic data for each earthquake, and recalculating locations in three dimensions using a better model of crustal structure for this region. (For a discussion of why scientists must relocate earthquakes, see this previous IRIS science highlight).

Choi then teased out distinct faults oblique to the eastern Denali fault, finding that many of the intervening small jolts that occurred just after the first event migrated toward the second mainshock. Moreover, the aftershock sequence mirrored the motion of the mainshocks.

If the eastern Denali Fault could rupture at similar magnitudes as its western cousins, that would have serious consequences for seismic hazard assessments in Whitehorse, the capital of the Yukon and only city in that province, as well as for Juneau, Alaska’s state capital. However, Choi and her colleagues found no indication that any of the St. Elias Sequence ruptured the eastern Denali fault, suggesting that something about this stretch of the Denali fault system has changed.

Much of the western margin of North America consists of terranes that have been attached, or accreted, to the continent over time. Alaska is no different. This process requires that the North American plate boundary in Alaska has stepped southward and westward through time

The Denali fault, for example, served as the plate boundary between North America and the Pacific millions of years ago. More recently, another strike-slip fault system transported the Yakutat terrane northward, which eventually began subducting beneath southern Alaska, according to Eva Enkelmann, one of Choi's coauthors and an associate professor at the University of Calgary. “At 6 million years, the stresses changed and may have shut off the motion along the eastern Denali fault entirely,” she says, corresponding to a northward shift in the direction of Pacific plate motion. The defunct eastern Denali fault transitioned from plate boundary to deformational backstop, and the zone between the Denali fault and the Fairweather fault — in which the St. Elias earthquake sequence occurred — now diffusely accommodates plate motion.