On May 5, 2018, NASA launched the InSight Lander from Vandenberg Air Force Base in California to Mars’ Elysium Planitia, which loosely translates to plains of paradise. InSight (which stands for Interior Exploration using Seismic Investigations, Geodesy and Heat Transport) landed near Mars’ equator in November of 2018 with a seismometer on deck. On December 19, 2018, a 1.8 meter-long robotic arm placed the seismometer, called SEIS (Seismic Experiment for Interior Structure) onto the Martian surface, with scientists remotely adjusting the instrument over the next few weeks.

On February 4, 2019, the robotic arm perched the Wind and Thermal Shield atop the seismometer. From the shield’s aluminum dome hangs a gold-coated thermal blanket hemmed with chainmail whose weight ensures that the contraption stays in place. This protects SEIS from daily temperature swings and reduces seismic noise caused by both temperature changes and harsh winds.

Since deployment, teams have detected more than 450 marsquakes, including both high- and low-frequency events. Of these, two marsquakes originating in or near Cerberus Fossae, on the eastern side of Elysium Planitia, show P- and S-wave onsets typical of traditional earthquakes. Noting the need to find smaller marsquakes buried in noisy signals, Weijia Sun of the Chinese Academy of Sciences and Hrvoje Tkalčić of The Australian National University applied filters designed to search the noise, and found 47 new low-frequency events. Their results, recently published in Nature Communications, hint at magma movement in Mars’ mantle.

Gashes in the ground

Elysium Planitia drapes the south and east side of one of Mars’ towering volcanos, Elysium Mons. On the eastern side of Elysium Planitia, the gashes of Cerberus Fossae rend the ground. Named for the mythical three-headed dog that guards the entrance to Hades and the Latin word for ditch, the fissures of Cerberus Fossae are less than 20 million years old and extend for about 1,200 kilometers, showing vertical offsets of about 500 meters. 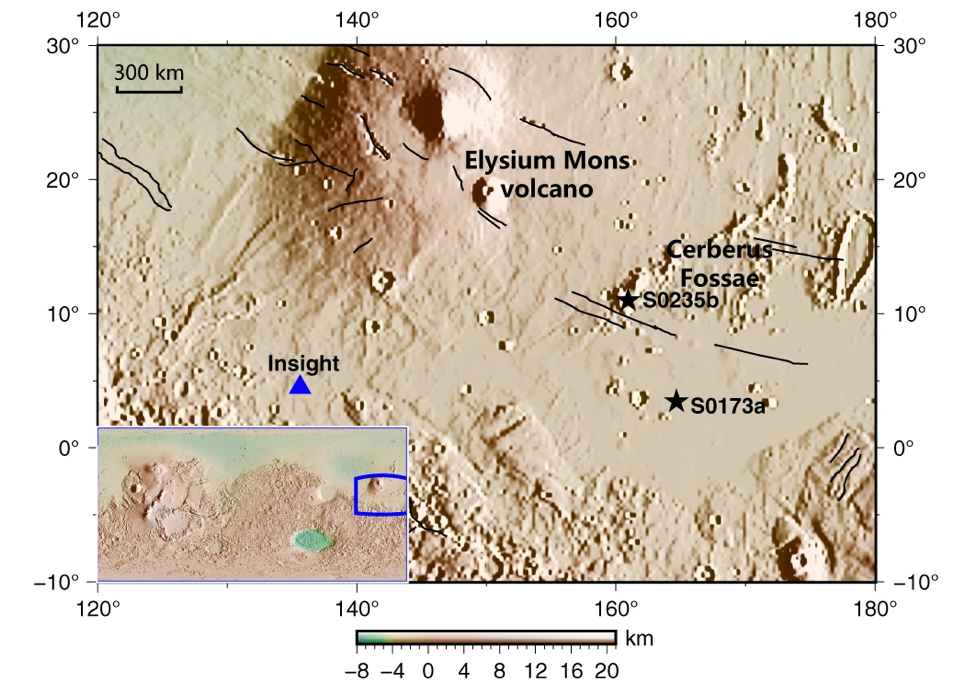 Past studies of boulders that appear to have moved great distances—between about 100 and 250 kilometers—suggest paleo-marsquakes in the region reaching up to magnitude-7.5. The canyons of Cerberus Fossae also contain evidence for the most recent volcanic eruptions on Mars, with lava flows less than a million years old. Explanations of the origin of Cerberus Fossae range from tectonics to thermal effects to fluid migration to magma flow. Although SEIS hasn’t measured anything quite like a magnitude-7.5 event, the two marsquakes that struck in or near Cerberus Fossae are among the best-measured events.

High-frequency events in the SEIS data, detected by previous workers, appear to be related to relatively shallow structures near the lander. While interesting on their own, says Tkalčić, they may not have provide much insight about deeper structures. Such events, detected by a triplet of SEIS sensors tuned to find high-frequency signals, tend to be shrouded by background noise (primarily the atmosphere, wind and pressures changes and their interaction with the lander), with small events often hidden from view. On the other hand, low-frequency events penetrate the deep crust and mantle. These marsquakes can potentially tell scientists more about Mars’ internal structure, and they tend to be less affected by Martian noise.

Some of the techniques and methods developed on Earth, our home and our perfect natural laboratory, says Tkalčić, can be used to explore the Martian data. With a focus on the instruments’ three very-broadband seismic sensors that detect low-frequency signals, Sun and Tkalčić used data collected from February 12, 2019 to March 31, 2020, available from IRIS. To explore the data, says Tkalčić, they used two unconventional methods: the matched filter technique and the Benford’s Law approach. Unfortunately, the Martian data was not amenable to the Benford’s Law approach. “It works well only for larger events,” he says, “but not for small events buried in the noise.”

For the matched filter technique, Sun and Tkalčić used signals from known quakes—in this case nine previous low-frequency marsquake detections—as templates to search the noise for similar seismic waveforms, finding 47 new events. This method assumes that if quakes with the same type of movement (different types of movements shown in the video shown below) rupture in nearly the same location as a “parent” event, the waveforms will look similar. Based on that assumption, these new marsquakes nucleated in the mantle, just like their “parents.”

Of the 47 new events, more than 90% were located alongside the two high-quality Cerberus Fossae marsquakes. Most previously discovered marsquakes occurred during the night—Mars’ surface is less noisy at that time—leading previous researchers to postulate that some marsquakes result from daily temperature swings. These newly discovered marsquakes, however, occur both day and night, indicating no link to surficial thermal effects.

Marsquakes can indicate geologically active areas, but whether the activity results from volcanoes, tectonics, or something else, is less clear. Because these newly discovered marsquakes are repetitive, Sun and Tkalčić argue that tectonic faulting is less likely to explain them. As a planet with only a single tectonic plate, the authors consider these marquakes comparable to intraplate earthquakes, often caused by either volcanism or fluid flow.

The crust of the southern hemisphere of Mars is about 25 kilometers thicker than that of the northern hemisphere, but the exact thickness at any given place is poorly constrained. For example, the crustal thickness beneath the InSight lander could be either 20 ± 5 kilometers or 39 ± 8 kilometers, based on seismic data.

“Knowing Martian crustal thickness would increase constraints on how the planet evolved thermally over time,” says Tkalčić, “including the process of differentiation and magmatic processes responsible for its formation.” Finding more marsquakes—especially those that sample the deep interior—could help scientists better constrain not only the variable thickness of Mars’ crust, but also the structure of its mantle and core, why Mars lost its magnetic field, and even how the planet was assembled.

Had anyone told Tkalčić as a child that one day marsquakes would be discovered, “I would have told them that they were dreamers,” he reminisces. “Fast forward almost five decades and here we are, with—literally—hundreds of marsquakes used to take a pulse of our planetary neighbor.” Now, he says, humans plan and execute missions to many other parts of our solar system, including Titan, Enceladus, and beyond. “We can now dream even grander dreams of going to more distant worlds, and probing their interiors in search for the signs of their internal activity.”

Published on May 16th, 2022 Archived Stories